In addition to my class of high schoolers, I also had a few more classes.  I worked with the night class, which was full of adults who worked during the days and wanted to learn English.  I also taught beginning French, which was certainly an experience in itself.French Class

The night we arrived, the director of our school told me I’d be teaching French.  When I tried to back out, she was adamant that I do so.  There was no way to get out of it.  I was extremely nervous about teaching French to people who only sort of spoke English.  I roped another teacher into helping me, one who hadn’t taken French since high school.  Basically, she provided the enthusiasm and I provided the pronunciations.  The class worked really well together.

We covered a ton of material in a few short weeks, and the students caught on really quickly.  The most desirable industry on the island is tourism, so knowing several languages would really serve them well, even if they only knew greetings.  We also had a beginning Spanishclass, which was a lot for the students, but they handled it really well.  It ended up being my favorite class because everyone put forth so much effort.  Teaching French in English to Swahili-speakers was a challenge, but one that I loved. 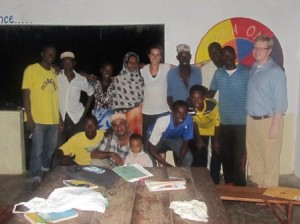 Night school’s lead teacher, Chaga, was a resident of the village where we were staying, so we were there to help him out.  The students were really advanced and wanted to know really minute details in the English language and idioms.  The adults needed a lot more examples than the kids did, and we played a lot fewer games.  Chaga’s favorite movie was Major Payne, so Thursdays we watched the movie with the students and discussed it.  It was really bizarre to be watching an English movie in a village in Africa, but the students caught on really quickly and asked a lot of good questions, particularly about American schooling.  In the movie, there is an ROTC group at the school with kids of all ages learning how to be soldiers.  They didn’t understand why Americans would have child soldiers, and so we had to explain that it was a movie and was just a club, not the real military, which led to more questions.  I really loved comparingour schooling system to theirs. 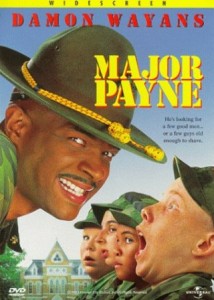 All in all, I loved all my classes and learned just as much from them as they did from me, if not more.