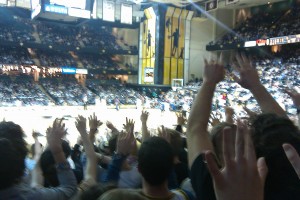 Yesterday evening, the Vanderbilt Athletic Department and Vandy Fanatics held their biggest event of the year, Memorial Madness, an annual basketball pep rally that ushers in the start of the SEC season. With the promise of the company of close friends, free pizza, jersey/ticket give-aways, prize drawings, the chance to win $10,000 upon successfully landing a half-court shot, eating contests, and cheerleader dance moves that conjure up memories of ‘Bring It On’, Memorial Madness is a spectacle that is hard resist for Vanderbilt students and greater Nashville residents.

My experience at Memorial Madness last year was one of my favorite from freshmen year, but this year I was pretty under the weather and had decided not to attend. I was tired from staying up too late the previous night and had a sore throat, but somehow a friend convinced me to go. As the game started, I still had not contracted the excitement, the “madness” that 10,000 or so others possessed, but that would soon change. We have a tradition at Vanderbilt that when our players are shooting free-throws we raise our arms towards them and move our fingers in a “spirit-finger-esque” type of motion. This is our way of unique way of saying “good luck” to the players and showing them that they have fan support. During one of these moments, hands raised, fingers moving, I looked around the student section and realized that this would be one of those moments that I would remember long after I left Vanderbilt. I had one of those silent moments of deep thought that no one around me was aware of as I watched the crowd. Sick and sleep-deprived though I was during that moment, I felt such a sense of unity with my classmates and fellow undergraduates. I felt as though we were all on the same page, at least for that small amount of time. As cliche as it sounds, it was one of those moments in which I remembered that I belong here.

A big concern for many students who are newly committed to or even attend a university is whether or not they made the right decision. Nights like tonight, I say tonight although it is 2:00a.m., remind me of why I came to Vanderbilt. I chose this place not only for the academics, but for the social experience. Memorial Madness is a special, undeniably Vanderbilt-specific experience that reminds me that I made the right decision. Many people are drawn to Memorial Gym, and reasonably so, by the free prizes, Vandy fanaticism, the opportunity to watch our winning basketball team compete and to feel the energy of a live band, but, perhaps like a student does regarding a university, stay because they feel connected; they belong.